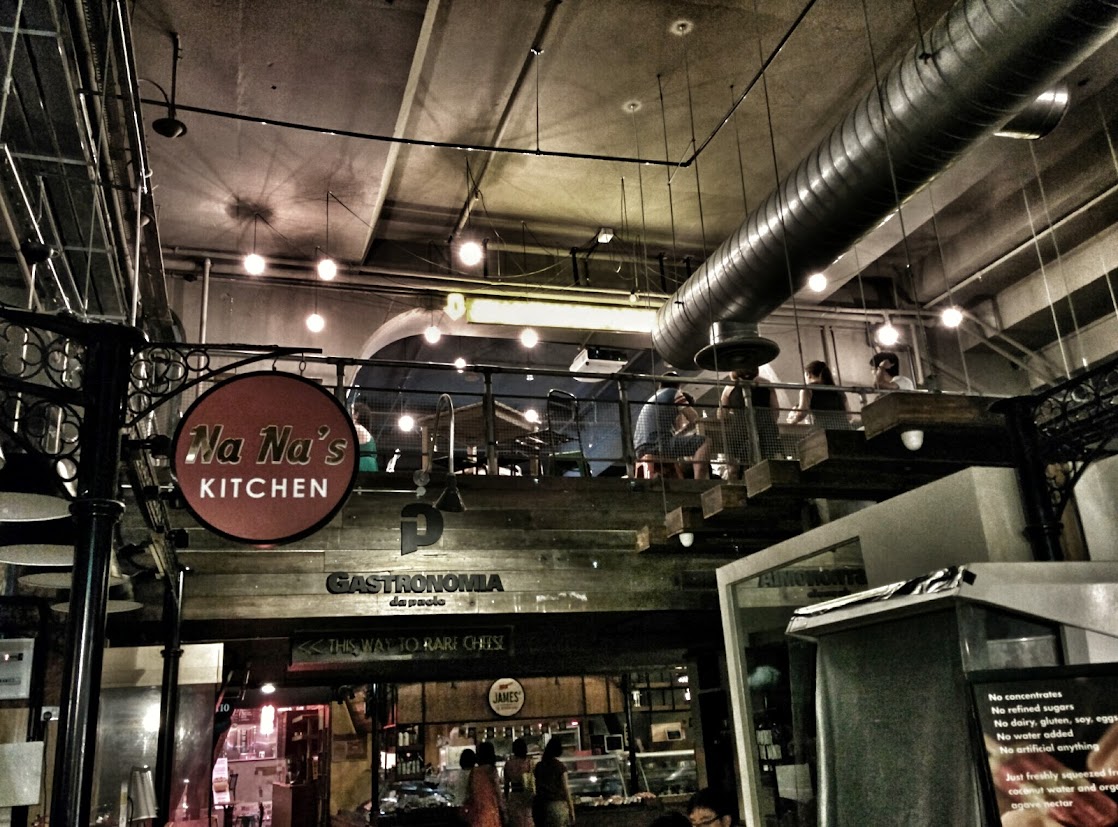 So, heard a lot about it, never gone because it’s so far, finally been there.

2. What an eclectic mix, don’t quite know what to make of it. is it for non food stuffs, wines, desserts, dinner, snacks, takeaways? jack of all trades and master of none.

3. Got turned away at 8.15 by a stall. oh you’re closed already?? I had thought you guys were all desperate for more business. Then encountered a not-exactly-that-friendly stallkeeper. What is wrong with everyone? Too much stress on a friday night?

4. Not enough variety for a complete dinner. Not enough lounging areas and late timing for dessert/drinks folks.

That said, the place is really beautifully designed.

The dark cherry cake and tea from ?Lana’s was really good. I was just awed by the tea cups. Real, proper, tea cups. All other cutlery and plates were plastic. Which is really ridiculous given that this is a fairly upscale place serving respectable food. Awkward plastic cutlery. The tea cups are really a winner. I can see that the people here quite like their food and are passionate about it, fancy organic foodporn video notwithstanding. I think they need to work on their identity, their location and opening times.

It’s really quite similar to Granville market in Vancouver. But Granville is fairly central in the middle of town, and it’s a huge art/touristy area. Lots of design shops, art shops, high traffic, great scenery, accessible. Turf City, is just one of the worst places in Singapore. An old abandoned horse racing building, deep inside private estate area, far out from the city and any other attraction. Far for workers, far from students, far for tourists, far for hipsters.

I would like to see ‘Pasar Bella’ or it’s successor as something more organic, more real, something that grew out of a real market, a real neighbourhood with actual people who live there work there sell actual food there. The current concept is too commercialised and planted. Cities grew up where trade beckoned, where ports were, where rivers flowed. People settled and set up businesses. Food sellers established themselves near to fresh produce, where the markets were. Culture is hard to buy and fabricate, the best you can do is to encourage, or give it space to grow.

Reminds me of malls. They said a few new malls are opening this year. (Well every year malls pop up all over Singapore, but they’ve got to find something to news about.) Malls. Malls in prime shopping districts, malls in suburban spaces. It seems that the same chain shops set up all over. The same few mall developers approach the same few fashion retail and the same few f&b outlets that can afford mall rent, mall opening hours, mall space. Malls open from mid morning till early evening, shops set up within their little air conditioned glass walls. It’s expensive, it’s sterile. It’s good for fashion, but it’s fairly bad for f&b and entertainment. It’s also bad for new businesses who cannot afford the high rent, it’s bad for shops who want to create their own identity and feel, it’s bad for those who want a laid back atmosphere. Unfortunately non-mall retail space seems to be on the decline. Old blocks are torn down, old market neighbourhoods get more run down and abandoned. The expensive and controlled Apple-esque SG govt culture is stiffling innovation. But if you have huge billion$ coffers like Apple and are enjoying it, why would you want to tear things up and make a mess, right?

One thought on “Pasar Bella”